﻿"One hundred years from now, it will not matter what my bank account was, how big my house was, or what kind of car I drove. But the world may be a little better, because I was important in the life of a child." ~Forest Witcraft﻿ 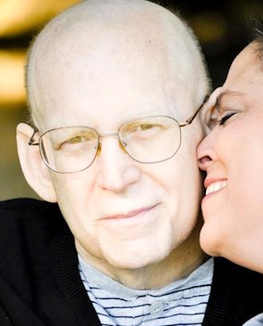 Robert E. LaSalle was diagnosed with stage 4 small cell cancer in his stomach and liver on December 15, 2009. In April 2010 during diagnostic testing to determine the effectiveness of his treatment for small cell cancer a second primary cancer called Esophageal adenocarcinoma was discovered. Initially Robert & Becky made the trip to Tulsa, OK for chemo treatments every 21 days for 3 to 5 days of chemo however his treatment plan changed with the discovery of the second cancer. His new treatment plan called for TOMO Therapy (a specialized form of radiation therapy) 5 days a week  for 33 treatments plus chemo and Herceptin therapy weekly for the duration of the radiation treatments. On November 2nd Robert  had surgery to have his stomach and part of his esophagus removed in an attempt to stop the spread of the adenocarcinoma. Robert was in ICU for a few days following the surgery and then was moved to a regular room for several more days. The recovery from the surgery was harder than anyone imagined it would be. Robert was eventually put on a feeding pump and finding a formula that would work was a challenge. In December 2010 a CT scan was performed to check placement of the feeding tube and while the tube was okay there were new tumors found in Robert's liver. Robert was hospitalized numerous times with pneumonia, malnutrition, C-Diff, neutropenia, MRSA, dehydration and had the original feeding tube removed and a new one placed in a different location as well as numerous tube changes over time. Robert has had 68 chemotherapy treatments using 6 different chemotherapy drugs, 33 TOMO radiation treatments, 5 SBRT treatments, 7 Herceptin treatments, numerous blood transfusions,  surgeries and reconstruction. Robert receives IV fluids as well as white blood cell building shots at home.  Robert was eventually in treatment at Baylor Cancer Center in Dallas till the end of his journey.  In November 2013 Robert went to the ER very sick where a CT scan showed that he had bleeding on the brain. Surgery was performed to stop the bleeding and a tumor was discovered in the base of his brain. The tumor was removed and Robert spent fifteen days in the hospital recovering. He was told that if he had not gone to the ER when he did, he would have died about 12 hours later. Robert proved once again that he was indeed Superman by surviving the surgery to repair the brain bleed and remove the tumor.

Robert and Becky were married for 30 years and are the parents of Melissa, Bobby, and Emily and grandparents to Shay, Edisyn & twin grandsons AJ & Gavin. They are the "parent-in-laws" of Abbey (Stark) LaSalle. Long time residents of Gainesville, Texas, Robert had been an administrator and/or coach for Cooke County Soccer Association, AYSO 1434,  Boys Baseball of Cooke County, and The Boys & Girls Club. Robert coached soccer with CCSA and AYSO for over 18 years. He coached literally hundreds of children in soccer, baseball and t-ball over those years.  Robert was voted the Clorox National Volunteer of the Year in 2008 by US Youth Soccer and AYSO National. Robert served in the Army from 1980-1983 and served overseas in Korea for 16 months of that time. He was a member of the Gainesville Planning and Zoning board,  was a member of the local Citizen’s Police Academy and even ran for City Council at one time. However, Robert's true love was always youth sports and he gave so much of himself to the children in our community through administering soccer programs, coaching youth sports teams and being a mentor both on and off the field.  Robert was employed at Mayday Manufacturing in Denton, TX until he had to go on SSDI. He had 9 months of treatment at The Cancer Treatment Centers of America in Tulsa, Oklahoma. Robert was then in treatment at Simmons Cancer Center at UT Southwestern Medical Center in Dallas, Texas for almost a year. Then, Robert remained under the care of Dr. Carlos Becerra at Baylor Cancer Center in Dallas, Texas until he passed away.

Robert had been unable to work and was on disability from mid-2010 till his journey ended.  Becky was an in-home childcare provider for 27 years however, Robert's oncologist advised shutting down the daycare due to the chemo compromising Robert's immune system. With great sadness the daycare was closed the first week of January 2010.

On December 5, 2013 Robert was admitted to hospice care. The brain injury caused by the brain bleed on top of cancer continuing to spread throughout his body became too much for treatment to control. He made the choice to move to hospice and live the remainder of his life as comfortably as possible. Robert went to his heavenly home on January 2, 2014.

﻿Robert's obituary can be found by clicking on the
"Robert's Heavenly Healing" tab above. 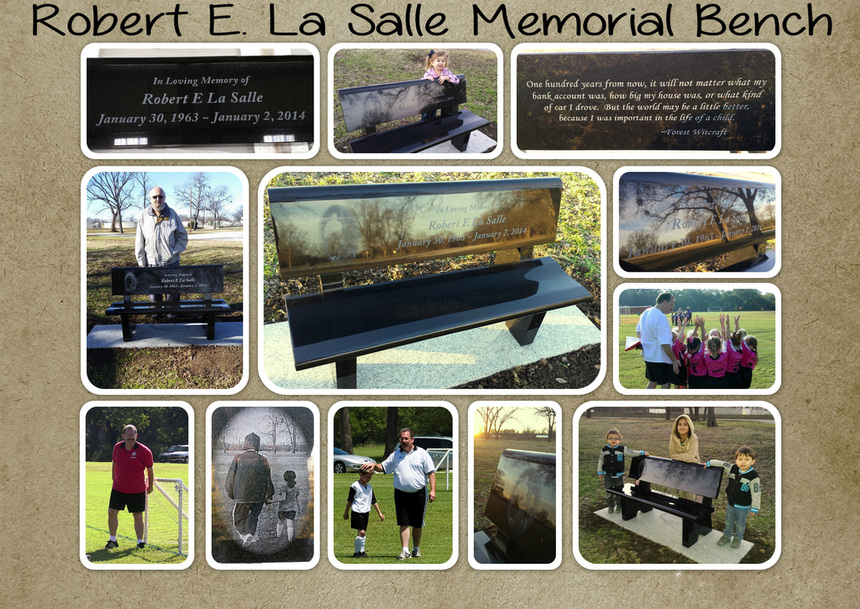 Our deepest thanks to everyone who helped make the Robert E. LaSalle Memorial Bench a reality!

For the love you have shown

A special thanks to everyone who prayed for us, made generous donations to Robert's medical fund, helped with fundraisers, stayed by our side throughout Robert's journey and helped make Rob's memorial bench a reality. We will be forever grateful for your kindness.
Thank you from the bottom of our hearts!